Complexity at ground plane, simplicity above
The judges commended Woods Bagot for “creating a perfect floorplate within an imperfect site” at 405 Bourke Street in the heart of Melbourne’s CBD, developed by Brookfield Properties and constructed by Multiplex.

“The Woods Bagot design achieves a beautiful resolution to the challenges and priorities of a value-orientated commercial development brief with a precise economy of structure, energy efficient services and deftness in material craft.”

They added that 405 Bourke Street, “contributed to the resolution of the urban realm enlivened by a calm and amenable place for work” – crucial at a time employers are trying to attract employees back to the office.

This success and simplicity above could only be achieved by overcoming the site’s immense complexity at ground plane, explained Woods Bagot Principal Simon Dick.

“It was an ambitious undertaking from the outset. The site is shoehorned between two residential buildings, an existing carpark and a historical facade.”

A striking 16.5-metre cantilever from level 11 to level 13 of the building enabled 405 Bourke – dubbed ‘The Lantern’ for the way its seven-storey glass lobby façade lights up at night –  to rise above the existing apartment complex and integrate seamlessly with its heritage facade.

This cantilever is integrated into the interior architecture, forming the ‘mega truss’ zone as an awe-inspiring and verdant space.

“The cantilever helped solve the site’s puzzle. We were able to find that generous floorplate we were seeking at level 14 and carry it through to every level above.”

Rising more than 40 levels and some 170 metres, 405 Bourke Street provides more than 66,000 square metres of PCA A-Grade accommodation and floorplates from 2,200 square metres with panoramic views of Melbourne from upper levels.

Designed at a time when commercial buildings were being pushed to the edges of Melbourne city, 405 Bourke Street sits the epicentre, fronting both Bourke Street (the ‘People’s Street’) and Little Collins Street.

It was this location that inspired a design language that reflected the city back to itself, embedded in essential ideas of Melbourne as the most livable and workable city.

“There’s an energy around the compression of the city at this site.”

“We realised that this layering of the activity of the city could be laminated together in an architectural expression.”

The rhythm of Melbourne’s Hoddle grid emerges in de-constructed form via multiple reflections and repetitions that refract and absorb light across the facade’s laminated edges.

The core design ideas of lamination and reflection are borrowed from the sculptural work of artist Gerhard Richter’s  – whose work Woods Bagot CEO Nik Karalis saw at the Tate Modern many years ago – and led to an architectural expression of the building as an assembly of stacked glass panes.

The dramatically simple facade system of repetitive laminations catches the sun differently throughout the day. At night, this lamination softly glows, leading Melbournians to give the building the nickname ‘the lantern’.

Now honoured by Australia’s highest architectural body, 405 Bourke Street is a testament to the value of commercial architecture that looks to its own city for inspiration. The building visually activates the urban fabric of Melbourne by creating an inviting landmark that adds character and a sense of simple elegance to a busy and bustling part of the city. 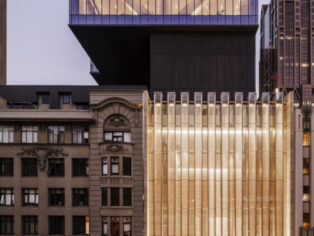 Woods Bagot utilised a 16.5-metre cantilever to enable 405 Bourke Street to rise above the existing apartment complex and integrate seamlessly with its heritage facade © Trevor Mein 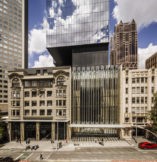