Woods Bagot in the running for the eight global design awards

Wood Bagot has been shortlisted for eight awards at the World Architecture Festival and companion interior design event INSIDE.

“Our extensive short-listing this year highlights the expanding quality and diversity of built projects being delivered across the world by Woods Bagot,”

Of the eight Woods Bagot projects selected, half are workplaces. The biggest is the mixed-use development at 80 Collins Street in Melbourne’s CBD featuring two office towers of up to 51 levels, a Next Hotel and retail.

At the other end of the scale is the intimate workplace and showroom Woods Bagot created for Sculptform Design Studio (pictured) which cleverly incorporates the company’s modular wall and ceiling systems into the detailed timber interior.

“It’s great to see the impact we are having on the global stage,”

The World Architecture Festival/INSIDE finalists were chosen from hundreds of entries from over 50 countries and winners will be announced at this year’s event in Lisbon, Portugal, from November 30 to December 2. 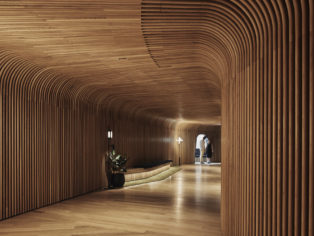