With a multitude of new developments, Monaco has changed considerably since 1960, when Prince Rainier III set up the Monaco Economic Development Corporation to draw new businesses to the Principality. Until the 1970s, villas were demolished and skyscrapers mushroomed in their place to accommodate the investors and workers who flooded into the tiny city-state. Blessed with a seaside location neighbouring the French Riviera and an average 300 days of sunshine each year, Monaco offers the added attraction of not having levied personal income tax on its residents since 1870.

The past few years have seen the skyline change again with the appearance of a wave of new contemporary developments such as Le Simona (completed in 2012), the Tour Odéon (2015), Le Stella (2018) and One Monte Carlo (2019). Here, we look at Le Stella, One Monte Carlo and two very different new developments Monaco will see emerging from its land and coastline.

In a country that has developed vertically, Villa Palazzino is quite unusual among the new developments. Monaco should see the completion of this residential building with just seven storeys in 2021. In contrast to the many bold contemporary designs that have come to life in the Principality, Villa Palazzino’s architecture will evoke the Georgian style seen in many parts of London. The facades will be painted red ochre, a colour that has long been used for buildings in Mediterranean countries.

Villa Palazzinio will rise from two plots of land where two small bourgeois-style villas used to stand. It will comprise four townhouses and 17 apartments, including a 355m² triplex penthouse with a rooftop pool. The two-bedroom apartments have offer a generous total surface area of 194m². All the apartments will be south-facing and have large balconies. The townhouses will offer living space of between 300 and 418m² and gardens. Villa Palazzino is conveniently located in a calm street in Monte Carlo’s Carré d’Or neighbourhood. The lively Place du Casino, surrounded by the iconic Monte Carlo Casino, Café de Paris and the Hotel de Paris and a step away from the new One Monte Carlo luxury shopping district, is just 800 metres away.

The contemporary Le Stella complex in the Condamine district is characterised by the concrete curvilinear bands of different widths that wrap around its facades. The two villas and 99 duplex apartments it comprises face Monaco’s famous Port Hercules harbour, where some of the most impressive yachts in the world can be admired. Rooms at the back of the building have views over the picturesque Old Town on its imposing rock. Residents can use the building’s fitness area and have a concierge service at their disposal.

The lower levels of Le Stella accommodate retail and office space and a school. The International University of Monaco is to take over 2000m² of the building when it moves from its current location in Fontvieille in the summer of 2019.

The architects, Frenchman Jean-Pierre Lott and Monaco-born Alexandre Giraldi, who have designed other buildings in the Principality, chose to distribute the apartments in two separate blocks connected by walkways. The one- or two-bedroom duplexes have loggias on both floors that serve as extensions of their light-filled living areas.

Villas are rare in Monaco and the two that form part of the Stella complex offer a particularly luxurious lifestyle with their indoor cinemas, saunas and swimming pools.

Of all the new developments, Monaco’s One Monte Carlo complex, designed by Sir Richard Rogers from Rogers Stirk Harbour + Partners, is the only one to have created a new neighbourhood in the heart of famous Monte Carlo district.

Six buildings with elegant curved facades house 37 luxury apartments with high-tech features such as retractable facades. The apartments have floor-to-ceiling windows, enabling the spectacular sweeping views over Monaco and the Mediterrean to be fully enjoyed and allowing plenty of daylight into the living space.

The surface areas range from between 60m² and 800m². The apartments, which include six triplexes with private swimming pools, are available for long-term rental only and come with concierge and valet services and use of the pool and fitness areas of the nearby Hotel de Paris and Thermes Marins wellness centre. Residents also have the option of using the Hotel de Paris laundry, housekeeping and room services.

A new luxury shopping street named after Princess Charlene of Monaco has been created between the buildings. It runs perpendicular to another street of boutiques called Avenue des Beaux Arts, forming an attractive pedestrianised area embellished with luxuriant vegetation and lined with palm trees.

One Monte Carlo also features an office building, and a conference centre and art gallery lie beneath the residential pavilions.

In an earlier period of new developments, Monaco’s surface area was increased by 33 hectares when a new district, Fontvieille came to life on land claimed from the sea. More than 50 years later after that engineering feat, another ambitious land extension, Portier Cove, is underway. When the six-hectare extension is completed in 2020, a new eco-district will rise from it, which should be ready to welcome its new residents in 2025.

The $2.4 billion Portier Cove project comprises luxury residential housing including villas – a landscaped park, a seaside promenade and a marina. It will feature rain recovery systems, e-bike stations, solar energy panels and thermal pumps, thereby contributing to Monaco’s goal to be entirely carbon neutral by 2050. The 120 residential units will be able to house around 1,000 people, which is good news in the most densely populated country in the world that attracts more wealthy residents every year. 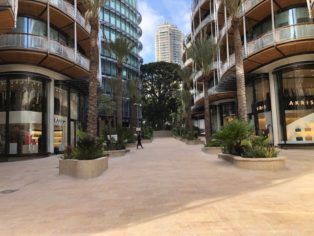 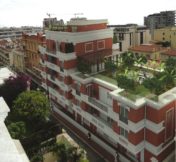