Terminal 3 at Taoyuan airport is planned to accommodate 45 million passengers a year. UNStudio’s design challenges the accepted utilitarian approach to airport design in an effort to propose a new global standard for an efficient, sustainable, flexible and innovative terminal model.

With a core team, comprising Bio-Architecture Formosana from Taipei, April Yang Design Studio from Ohio, and a multidisciplinary consultant team – UNStudio reexamines the airport typology through careful analysis of the existing terminals at Taoyuan, whilst anticipating airport operational requirements, infrastructure and the spatial constraints of the site.

Using personal travel experience as a starting point, UNStudio felt that in recent times airport architecture has become rigidly prescribed as a typology with excessive and monotonous use of space. Michael Speaks (jury member and Dean and Professor at Syracuse University) stressed that ‘UNStudio offered the most innovative design concept’. He expressed that ‘the entire jury agreed that UNStudio’s airport design was the one they would want to experience most’. With ‘place making’ at the central core of the design concept, UNStudio strived to distinguish its design from a generic solution by designing for the users and by creating an interior ecology that is entirely distinct from the look and feel of comparable airports.

UNStudio’s design is characterised by its efficiency, short walking distances and optimised airport functions following the principles of natural wayfinding. A small footprint and enough area for landsite construction allow for a quick building assembly with a prefabrication strategy. All of which contribute to a simple, fast paced, sustainable and effective implementation of the overall design strategy.

“The building design provides a clear organisation that offers passengers high efficiency, while satisfying the need for physical convenience and comforts.”

In UNStudio’s design the concept of ‘place making’ is achieved through the creation of a sequence of spaces that privilege comfort, ease of use and orientation. The different spaces, micro climates, are defined by physical conditions related to daylight, humidity, temperature and air flow corresponding to the predominant use of such zones, whereas the plants, media, art and Taiwanese culture constitute the integral components of these different zones. In UNStudio’s proposal for Terminal 3, the architecture is responsive to all environmental constraints, and an outer and inner shell work in concert with one another to ensure the optimum performance of all spaces.

The new aviation hub will be the gateway for Taiwan and the Aerotropolis. By locating the main entrance of the terminal building at the south-west end of the site, in UNStudio’s proposal the main entrance of Terminal 3 has been designed to become the most visually prominent facade for the Taoyuan airport.

“With the aim of the client to be amongst the top of the international airports in the region, it was necessary to develop a concept that conflates functionality, atmosphere and flexibility – an airport that is sustainable from the get go.”

In UNStudio’s design the experience of the journey starts from the outside of the terminal building. The undulating roof guides the public to the various entrances.

It is through attention to detail across all scales that UNStudio’s design for Terminal 3 achieves a holistic design approach. The place making strategy enables the simultaneous effect of appeal to the user and as a consequence, to the stakeholders within the airport industry. 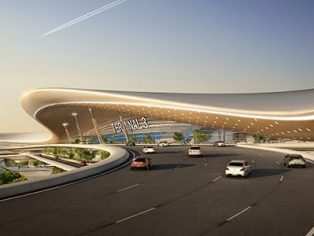