UNStudio’s winning concept for the former Deutsche Bank site in Frankfurt proposes a mixed-use development comprising offices, apartments, hotels, retail, gastro and open public spaces. Four high-rise towers, up to 228 metres in height, will provide approximately 600 new apartments for the new city centre district. The main towers will become the highest residential and office buildings in Frankfurt, whilst the varied programme proposed for the plinth will invigorate the financial district.
Ben van Berkel:

“Bringing a mixed-use project into this financial district will not only enliven the area during daytime, but it will also introduce evening programmes and create an essential form of social sustainability to this part of the city. The introduction of the residential and the leisure components are key to this strategy. This sculptural family of towers will also create the suggestion of a cohesive neighbourhood within the skyline and emphasise the importance of this part of the city within the whole.”

Opening up the site to revitalise the city centre
A key aim of UNStudio’s proposal was to open up the site towards the city centre and integrate the listed building façades in the Junghofstraße.
New connecting routes, passages and squares within the site will enliven the area and connect it to the pedestrian zones in the city centre. Publicly accessible spaces, such as a planned roof garden, a city square, multiple restaurants and retail outlets aim to improve the quality of time spent in the financial district. Accordingly, the proposals are in line with the city’s objectives of making the area more accessible and generating more public use, whilst simultaneously creating space for apartments and hotels on the location.

Olaf Cunitz, the Mayor of Frankfurt and Director of the city’s Planning Department:

“The winning design provides the greatest potential for turning the interface between the financial district and the city into a functioning, mixed-use district with new apartments.”

Two office towers, two residential towers and one mixed-use complex
The four high-rise towers and public spaces on the Deutsche Bank site will form a new urban quarter. Two of the towers are earmarked for residential use, while areas for restaurants and retail will also be developed. With its special location within the skyline and its adjacency to the shopping and pedestrian zones of the city centre, the project has the potential to create an area of cosmopolitan urbanism that is unique in Germany.

The development operates as an urban hinge to connect the financial district with the city centre. With a diversity of publically accessible functions not only connects former separated areas of the city, but creates a unique and lively destination for inhabitants, professionals from the Bankenviertel, neighbours and visitors. Through a sequence of two public squares and numerous pedestrian accesses the new quarter promises to become a lively new neighbourhood in Frankfurt.

The project will include a new high-rise building with 59 floors – another building within Frankfurt’s Skyline that has the potential to enrich the high-rise landscape. This tower is already included in the current zoning plan. The two additional high-rise residential buildings that together will provisionally provide space for more than 600 apartments are new features. In addition, there will be a daycare centre for children, two hotels and a wide-ranging selection of restaurants and retail outlets.

The four towers are grouped in such a way that the central square is completely framed. The differentiation of the orientation and heights of the four high-rise buildings articulates variations within the skyline and optimises daylight penetration. The volumes of the towers, with their subtle kinks and shifts, create unique spatial and visual relationships.

UNStudio’s proposal was selected as the winner in the competition for the urban development of the area, which was organised by the owners of the site, Groß & Partner Grundstücksentwicklungsgesellschaft mbH, in November 2015. The aim of the competition was to establish urban development proposals for the creation of a diverse and lively district. UNStudio’s proposal will form the basis for the amendment of the city’s development plan.

In May 2016, the proposals from all the architects who took part in the competition will be showcased, alongside a presentation of the concept for the district and the announcement of the future name for the site.

The next step will involve further qualification processes for the building, which will commence shortly. The start of construction of the new district is expected in the course of the coming year, while the first building is expected to be in use in 2020. 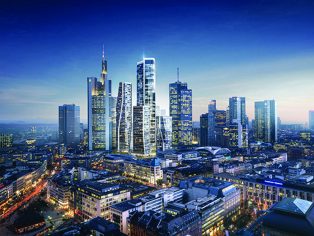