A tectonic shift has overtaken the retail construction sector over the past five years as retailers have responded to the challenges of persistently weak consumer spending and changes to how and where people shop. Stephen Cousins asks “where is it heading next?”

Consumer confidence is returning to the retail sector, sales are on the rise and a plethora of schemes are either coming to site or proposed, ranging from major city centre developments, to regional shopping centre conversions, convenience stores, and warehousing for online retailers.

The latest market analysis from Glenigan shows that, although the underlying value of project starts slipped back 8 per cent in 2014, the number of projects starting on site increased, with refurbishment and fit-out projects accounting for a rising proportion of work in the sector.

“The recent focus of the market has been on improving existing assets. Examples are the Southside Wandsworth and the Intu Watford extensions. This is also particularly the case for secondary stock, which has not been looked at throughout the recession and the time has come for landlords to bring them back to life.”

The shopping centre investment market completed an impressive 14 deals worth a total £828.9 million suring the first quarter of 2015, according to a report from real estate firm Savills, with a “staggering” 31 schemes currently available for sale with asking prices totalling approximately £1,284 million.

“The whole picture is very positive, where just two to three years ago things were very tentative. There’s a lot more confidence from developers, all the jobs we had shelved from 2007 onwards have restarted, the majority of developments were either bought by new owners, or are with the original owner who has decided to pick up the project and run with it again.”

Consumers’ preference for seeking out bargains online has led to a transformation of traditional shopping habits, with retailers now trying to cater to internet and store sales, and offering experiences not possible in the virtual world. The hassle of having to be at home to receive online deliveries is driving interest in Click and Collect services, and many landlords and shopping centre owners are making that provision for tenants.

The £14 million Bolton Market Place shopping centre redevelopment, designed by Wren Architecture and currently on site, will feature a dedicated 15 minute Click and Collect area on the street where shoppers can pull up in a car and collect their purchases, rather than have to park in the multi-storey car park. Click and Collect lockers, with bespoke graphics, are also now being installed in shopping centres where products bought online can be picked up 24/7 using a unique unlocking code.

There is also a trend for large retailers, such as Nike, or Apple, to use physical stores as brand showcases for their full range of products, where customers can go to examine and choose what they want before buying it either in store or online.

“There’s a general trend for larger stores so retailers can provide customers with a larger range of products for people to select from. There’s an economy of bigger stores, as it doesn’t need more staff to run,” said BDP’s Coleman.

The concept of multi-channel selling, and offering customers every selling option simultaneously, is now the norm as retailers aim to communicate and facilitate a better service, aware that if they don’t consumers will look for it elsewhere.

In the face of booming online sales, shopping centres are having to work harder to elevate their status as destinations by offering more leisure and food and beverage outlets, which in turn increases consumer “dwell time” and volumes shifted off floorplates.

“That is one reason why a number of schemes are now cinema-led redevelopments, on the back of a cinema you can attract a certain amount of restaurants,” said Philip Wren, director of Wren Architecture. “More landlords now looking at the A3 Use Class , rather than A1 , you can’t have a dining experience online.”

Developers are having to work schemes much harder to increase their commercial value and make potential investments stack up. There’s pressure to make sure that every possible space is let, many look at opportunities for installing kiosks in malls, or advertising opportunities on walls. Ad companies like JCDecaux can earn considerable sums, even the same annual income as a shop, by placing a large digital screen on a strategically positioned wall.

“Consumers are demanding a greater variety of retail and leisure in centres to take them offline. As a result, Landlords need to be flexible and change the way they have traditionally perceived space and leasing – they have to think creatively in their asset management strategies,” said Leslie Jones’ James Cons.

The success of large shopping centres in major regional cities, such as Cabot Circus in Bristol or The Trafford Centre in Manchester, has played a continuing role in the demise of smaller second or third tier retail schemes in nearby regional towns. Many of them, built in the 1970s and 80s, lack the large floor plates and double height spaces needed to house restaurants or larger retail units to attract the modern shopper.

“Compared to 10 years ago, smaller shopping centres’ purpose has been supplanted by larger schemes,” said Philip Wren of Wren Architecture.

“For example, Manchester’s expansion has been at cost of surrounding towns and suburbs, including Wigan, Warrington, Bury, and Bolton, which are all suffering because people are driving to Manchester for their shopping and entertainment.”

Wren is currently working to deliver a contemporary update to Bolton’s Market Place shopping centre, a typical 1980s scheme recently bought out of administration by developer-investor Moorgarth, backed by South African retail billionaire Christo Wiese. The project involves the removal of car parking decks to create space for a cinema, and the refurbishment of 19th Century vaults underneath an old market hall to create 20,000 sq ft of space for restaurants. “The plan is to regenerate the centre of Bolton by extending the scheme’s working day, bringing in a new customer base and broadening its appeal,” added Wren.

The impact of competition from internet sales and large shopping centres has also left high streets struggling to win the hearts and minds of consumers and investors. It has led to an increase in vacant properties and more lower rent uses, such as charities or betting shops, a switch in focus to convenience shopping, aimed at local residents and businesses, and conversion of properties into housing.

“The problem is that radical change in towns is often quite difficult because there are multiple ownerships, and unless everyone buys in to change it won’t go ahead,” said BDP’s Coleman.

“Many developers, funders and institutions are more attracted to comprehensive developments, where they can implement the controlling things that make a difference.”

This might include the ability to creating the right mix of spaces and building services for tenants, as well as amenities for the public.

Nevertheless, novel approaches to high street regeneration have emerged, such as the Box Park pop-up mall concept in Shoreditch where a series of stacked sea containers provide short term lets for independent traders, fashion brands and cafes. A similar scheme opened in Brixton in May and a new Box Park is planned as part of the regeneration of Croydon city centre.

Consumer confidence and retail sales may be on the rise, but the sector continues to face challenging structural changes that are expected to some extent to limit support for construction activity going forward.

A 2014 survey of retail CEOs carried out by professional services firm PwC revealed that 91 per cent said they were “concerned” about shifts in consumer behaviour, while 28 per cent saying they were “extremely” concerned.

One clear reaction to this unease is the recent retrenchment of the UK’s top four supermarkets, until recently a major source of retail construction activity, which have scaled back investment in large newbuild stores to focus on the convenience market and upgrading existing stock.

Construction inflation is another potential obstacle to development – currently as high as 7 per cent for building materials – which is putting pressure on scheme appraisals, rents are not moving ahead as aggressively as construction costs, which acts as a barrier to progressing with much needed development.

“However, there are opportunities to be had for new developments and regeneration projects throughout the UK – particularly in areas where public and private sector finance can add real value to local assets. One example is Friars Walk in Newport, where the combined backing of Newport City Council and Queensberry Real Estate has unlocked development of a significant retail and leisure scheme to revitalise the town centre,” said Leslie Jones’ James Cons.

The advance of technology and online looks set to continue to reshape the shopping experience. The PwC survey found that 80 per cent of retail CEOs ranked “technological advances” as one of the global trends that will transform their businesses most over the next five years. This view is supported by the fact that 41 per cent of global shoppers bought products through tablets in 2014, compared to 28 per cent in 2012, and 43 per cent through smartphones.

This brave new world will be underpinned by new and disruptive technologies, such as ‘Beacon’ technology, which enables retailers to connect with customers directly via their smartphones offering, for example, promotional offers. Provided the consumer gives their consent, this will enable retailers to tailor marketing approaches to very specific customer groups, or specific individuals, to learn how much a certain customer spends on an average visit to a store and what exactly they are buying. So shopping is not dead, it’s evolving, providing exciting new opportunities to transform and reshape architecture in the urban realm. 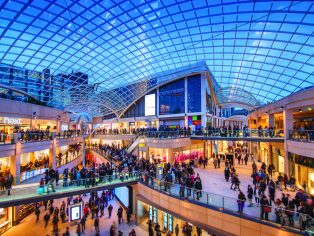 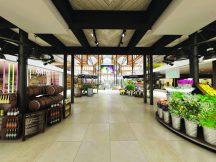