Following a competition in which the inhabitants of Den Bosch were invited to vote for one of two finalists, UNStudio’s design for the new city centre theatre was selected for realisation, having received 57 percent of the votes. In total 2681 people (over the age of 12) cast a valid vote. In addition, the municipality conducted a survey among 5,000 people, while around 400 residents in the immediate area and other stakeholders received an invitation to vote.

The Theatre on the Parade is located in the heart of Den Bosch, adjacent to a large and lively public square (‘the Parade’) and near to the St. John’s Cathedral.

Alongside essential functional, regulatory and sustainable considerations, the location of the theatre calls for a highly contextual approach, however the architecture of UNStudio’s design places equal emphasis on the overall experience of the theatergoer and the public qualities of the project.

“Ideas surrounding sensation and cultural expression form the conceptual basis of the design. The massing of the building is simultaneously single and multiple: the shifting displacement of the volumes suggests separation and fragmentation, while moments of intersection fuse the volumes and result in an autonomous, single object within the urban fabric.”

Reminiscent of geological formations, the composition of the volumes thwarts expectations of alignment and order, thereby arresting the gaze and accentuating perceptions of volumetric and spatial arrangements. The composition of offset yet interrelated and connected parts thus avoids an image of seamless fusion, instead alluding to the dynamics and drama of the theatre experience.

Contextual considerations
The relationship with the surrounding buildings and the adjacent public square (‘the Parade’) was an essential consideration in the design. In order to cause as little hindrance as possible to immediate neighbours, the two auditoria are designed as enclosed volumes clad in natural stone, while the facades of the public spaces are constructed from glass, so that the theatre building and the public square seamlessly merge and visitors become part of the show.

The four volumes of the theatre frame the views to include the nearby St. John’s Cathedral and the Parade Square. The volume housing the larger of the two auditoria is partially sunken below ground, thereby ensuring that the building remains low and that sightlines to the St. John’s Cathedral are maintained. The massing additionally results in a compact building with an optimised volume and integrated stage towers, while a terrace on the third floor offers visitors further unobscured views of the city.

Interior and Vertical Foyer
The floor of the public foyer runs level to the ‘Parade’, enabling the theatre to form a natural extension of the public square. Guests can directly access the small auditorium via the theatre café, while the elevators and stairs take visitors to their chosen destination within the theatre.

The main stairway with glass balustrades forms the heart of the vertical foyer, which extends over four levels and is 19 meters in height. The vertical Foyer forms the column-free central space of the building around which all circulation takes place, thereby creating a dynamic movement of people through all levels of the theatre.

“The various levels of the vertical foyer can be utilised simultaneously for a variety of commercial functions. This enables flexible programming for public and privates events, shows and conferences. Such additional programming adds liveliness and versatility to the theatre building and extends its public function.”

Auditoria
The walls of the main auditorium, which seats 950, are clad with wooden lamellas which serve to improve the acoustics, while the floor – slightly recessed below ground level – provides a natural buffer to noise hindrance for the immediate surroundings. Similarly, if a number of events are taking place simultaneously, these do not interfere with one another.

The smaller auditorium, the ‘Paradezaal’ which seats 420, houses a flexible stage and retractable seating, enabling a variety of performance types: from intimate theatre pieces to celebratory events and shows which can use the complete space without seating.

During public events on the Parade Square – such as the traditional annual carnival – the doors to the theatre café can be opened and the internal sliding wall moved, thereby connecting the small auditorium with the public space and leading the revelers directly into the heart of the theatre.

Behind the scenes
The logistics for the theatre are carried out entirely underground by means of an innovative system that results in no inconvenience or interruption to the Parade Square. Trucks load and unload in the cellar, while goods are transported internally via elevators. The changing rooms and hospitality service spaces are also located in the cellar. Catering suppliers make use of a service road on the west side of the theatre and each level of the foyer houses a catering outlet which is served by a service lift from the kitchen in the basement.

After the Summer work on the design will continue and the planning procedure will begin. Start of construction is scheduled for 2017 and the new theatre is expected to be realised in 2020. 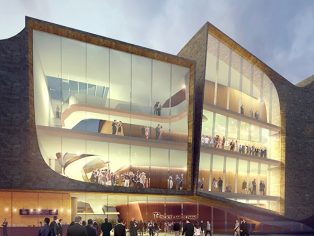 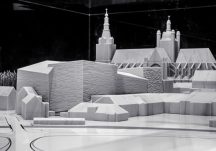