The house built on a pension

Thrifty pensioners Vic and Lilian Davidson built their ‘garden’ home in Nottinghamshire for just £28,000, thanks to hard work and the Internet. Words and pictures by Heather Dixon

Vic and Lilian Davidson built their house with their own bare hands for the grand sum of £28,000. It’s neither a futuristic nod to architectural design, nor a major feat of engineering, but it is an extraordinary accomplishment which demonstrates how hard work, commitment and a very tight budget can produce a comfortable – and affordable – family home.

It’s a property of modest proportions – the width of a double garage across the front by four metres front to back – and it sits at the bottom of their daughter’s garden. Just a zig-zag of washing lines and a plethora of play equipment separates them from the end-of-terrace townhouse which is home to seven of their grandchildren.

And for Lilian and Vic their house, which isn’t visible from the road, is idyllic.

For years they lived in unassuming tied properties as they moved around the country – 26 times in all – through Vic’s last employment as a hospital chaplain and they are delighted to be putting down roots at the start of their retirement.

But their self-build has been a mammoth task, with Vic doing most of the work single handedly, supported by family and friends lending a hand whenever they could.

“It started with the idea of building a log cabin, but we were advised that it wouldn’t meet Building Regs,” says Vic. “So we decided on a more conventional build which would include eco-friendly elements, such as extra thick insulation and environmentally friendly build materials.”

Taking control
They applied for planning permission in December 2014 based on Vic’s own plan drawings and were given the go-ahead just three months later. Following a rethink over the design, they successfully applied for additional planning to extend the length of the building to create a bit more living space – thus avoiding unnecessary costs with retrospective alterations.

“I was retiring in April so we were chomping at the bit,” says Vic. “We didn’t have much in the way of savings so we were basically using our pension to build the house. The only way we could achieve what we wanted was to build it ourselves and pay for things as we went along. We also did a lot of research to get the best possible prices. We probably couldn’t have done it without eBay – or Construction Materials Online who supplied most of our building materials.”

Although Vic was once an engineer, he had no experience of homebuilding and at the age of 66 quickly discovered muscles, resilience and stamina he never knew he had. He and Lilian moved into their motor home parked in their daughter’s driveway and Vic began to dig the foundations for what he affectionately calls the “granny annex”.

“We were like the Lady in the Van,” says Lilian. “We lived in it for 17 months in total and it’s amazing how quickly you get used to living in a small space. But it was fine for us. We could help with our grandchildren and be on site for the build. You just need to have lots of patience and not be too ambitious.”

Getting their hands dirty
To begin with they had to find the position of the main drains so they knew the boundary line of the foundations. They had to dig down three metres to locate the main sewage pipe and then obtain permission from Severn Trent Water to link up to it – even though the drain already services two streets.

“A local haulier was kind enough to loan us his mini digger but we had to dig a lot of the foundations by hand,” says Vic. “We shifted a total of 240 tonnes of earth between us, half of that by hand. We were a bit concerned that the area is in the heart of a mining community so we were very relieved when we hit solid rock. It reassured us that the foundations would be stable. We still had to carry on digging through it, so we used an old fashioned pick and shovel to create the soakaway and complete the foundations. It was hard labour and we are still recovering from the physical exertion of it all, but we saved a fortune in gym and sunbed fees!”

The plan was to have a small cellar beneath the house and Vic dug the foundations deep and wide enough to include the extra storage space. Only when he had finished did he discover that it would have to be radon protected due to the potential traces of radiation in the ground as a result of local mining.

“It would have been a ‘nice to have’,” says Vic. “Had we realised beforehand, we would also have saved ourselves a lot of digging, but hindsight is a wonderful thing.”

As Vic admits, he is “no brickie,” so instead of traditional brick walls they chose Celcon solar blocks with thin mortar joints, creating a double skin for efficient insulation, air circulation and moisture.

Learning new skills
“YouTube was a great help,” says Vic. “You can learn how to do everything from cutting your toe nails to building a house, so we watched a lot of videos and learned as we went along.”

Vic learned how to apply the thin mortar joints with specialist tools and, with the help of family and friends, he built the walls to roof height. The roof is a key feature of the house. Although they opted for standard trusses to keep costs down they chose environmentally friendly Eco Slate roof tiles from Roofing Superstore – another online find – for the finish. Made from 100 per cent recycled plastic materials, they create a strong, pliable slate effect for a fraction of the cost of the real thing.

The ceiling boards are covered with Firefly Vulcan Cavity Lining to comply with Building Regs. Because of the inclement cold weather, the tiles had to be softened with a hairdryer before laying.

By the time the roof was completed and watertight, the windows were ready to be delivered and fitted.

“We started out with £11,000 in savings and our pension,” says Vic. “We didn’t work to a set budget. Instead, we researched and found the best prices for everything and then when the money ran out we waited until the next pension day for the next purchase. We bought a lot of things on eBay, like the kitchen units for £600, because we just couldn’t afford to buy new. The only things we really invested in were the doors and windows and the house has really benefitted from that.”

The floors were then laid and the internal layout defined to create an open plan living kitchen, bathroom and bedroom. The space is small – just 42 m2 – but to Lilian and Vic, after 17 months in a camper van, it felt like a palace.

“It felt huge, even though we were downsizing,” says Lilian. “We gave away most of our furniture – we just couldn’t fit it all in. We have always tried to recycle and reuse things, rarely throwing anything away, which was useful during the build, but when you live in a smaller space you appreciate just how much we accumulate over the years that we don’t really use or need.”

Bargain hunting
When it came to creating the finishing touches, Vic and Lilian shopped around for units, bathroom fittings and carpet – finding some amazing bargains in the process. They budgeted £800 for floors and found a brand new tartan carpet online for £700, which has transformed the sitting area into a warm and cosy winter room.

“We went all the way to Scotland in the snow to fetch it,” says Lilian. “It was worth the journey. Then we went to Wales for the kitchen. We must have saved thousands of pounds by researching and recycling.”

The couple use LPG gas and the electrical appliances, although fitted by Vic, were connected by an electrician friend, who also helped with the plumbing.

“We were constantly impressed by the helpfulness of people,” says Lilian. “All the suppliers went the extra mile and we were overwhelmed by the support of our family and friends.”

The build was not without its setbacks. Vic fell off a ladder several times and Lilian broke her toe early on in the project, but nothing seemed to deter the couple from their long term goal.

“It was a daunting task and there were times when we wondered why we had started, but we knew this house would take us well into old age,” says Vic. “We have made it our retirement home. The fact that it’s in our daughter and son-in-law’s garden is perfect. They have seven children and it means we can be on hand to help out whenever we are needed, yet still have our own space and privacy.”

A caveat exists that says the house will never be sold separately, but Vic and Lilian have no intentions of leaving. There are still plenty of jobs to complete and they are in the process of building a separate access drive and defining their own section of the garden with landscaping, saving up for it as they go.

Their only regret is the purchase of a fire which is still in its packaging and unlikely to get used.

“We bought it because we thought we would need it, but the house is so cosy and well insulated that we don’t think it will be necessary,” says Vic. “It’s one of the few things where we could have reduced the build cost even further, but we still think it’s a lovely home for £28,000 and it will hopefully inspire others, who think they can’t afford to buy a house, to look at alternatives. Building our own home was always on my bucket list. Now that’s done we shall have a bit more time for the other things on the list – like climbing Everest and riding our motorbike along Route 66.” 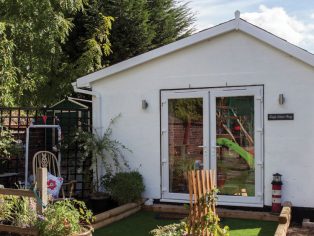 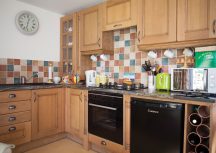 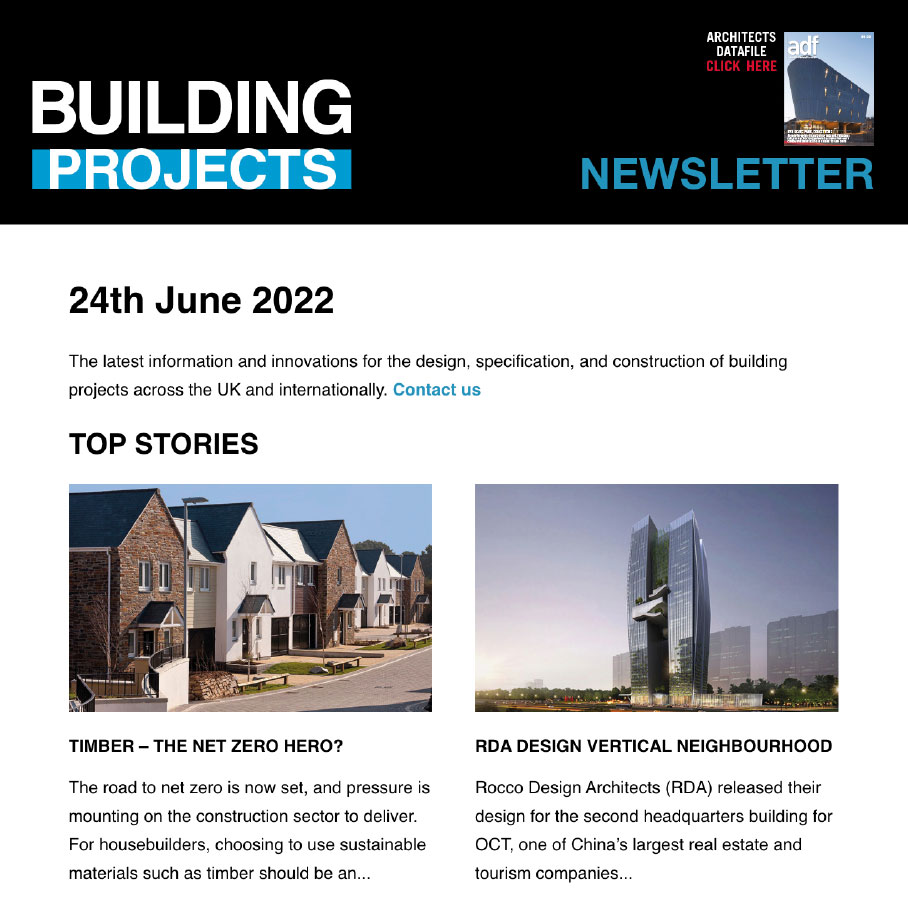