The winners were chosen from entries received from members of the three trade associations which make up the Structural Concrete Alliance: the Concrete Repair Association (CRA); Corrosion Prevention Association (CPA); and the Sprayed Concrete Association (SCA).

The shortlisted projects include Sika Ltd for its restoration of Poplar Baths in London; CCL (GB) Ltd for its upgrading and strengthening work at National Grid PLC’s Isle of Grain site near Rochester, Kent; and Volkerlaser for the refurbishment and strengthening of the Woodhouse Tunnel in Leeds.

Sika provided materials for an extensive programme of concrete and structural repairs to transform the Grade II listed Poplar Baths from a former public baths to a state-of-the-art leisure centre. Owned by Tower Hamlets Council, the building was in such a poor condition due to chloride-induced cracks across its entire 1,600m2 surface area that it was included on English Heritage’s at Risk Register.

In conjunction with the English Heritage and main contractors Guildmore, APA Concrete Repairs delivered a long-term concrete repair system and protective coating works to the building. Galvanic, sacrificial anodes were installed to manage steel corrosion in the interior which consists of curved reinforced concrete columns forming a series of arches.

CCL (GB) Ltd provided a solution to replace the existing restrainment system to the outside of the concrete bund walls surrounding the liquid gas steel tanks on the site. The 50,000m3 capacity tanks, originally commissioned in 1981, are each surrounded by a reinforced concrete bund wall to provide secondary containment in the event of a rupture of the steel tank.

The bespoke solution involved the design of special anchors capable of restraining bursting forces of 223 tonnes per anchor and included the safe detensioning of the existing wire from around the bund wall, using a post-tensioned assisted strap restrainment system. Defective concrete areas were repaired using a polymer-modified mortar, with a polymer-modified fairing coat and cementitious coating applied in the rebates.

The refurbishment and strengthening of the twin bore, 4 lane Woodhouse Tunnel in Leeds conducted by Volkerlaser involved two years of nightshifts to minimise disruption to the public.

It involved a complex combination of extensive concrete repair; strengthening by reinforcement addition; extensive sprayed concrete to large areas of repair; the introduction of galvanic anodes in most of the repaired concrete; and traditional formwork and reinforced concrete construction of wall thickening, involving extensive drilling and dowel fixing to tie the new construction to the weak existing walls. VolkerLaser developed a small structural tie allowing smaller drilled holes and reducing phasing requirements, saving time and money.

Commenting on the award, the judges stated:

“Choosing the winners was extremely difficult this year due to the high quality and diversity of the entries. CCL’s solution for the Isle of Grain bund was selected as we were impressed by the innovative approach to safely detensioning the existing wire system, which we recognised as being extremely technically challenging. 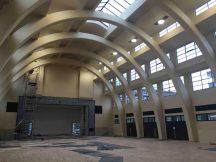 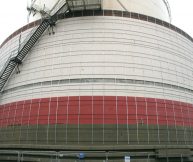