The groundbreaking ceremony for Oceanwide Center was held on Thursday, 8 December, marking the start of construction on one of the most pivotal urban projects in San Francisco’s recent history. Situated in the rapidly changing Transbay Area of San Francisco, close to Market Street and the financial district, this transit-oriented development is at the core of downtown San Francisco.

The Foster + Partners and Heller Manus design knits the new scheme with the urban grain of the city, enhancing pedestrian circulation through the site. It comprises 26,000 square-feet of new public spaces, along with two mixed-use towers: a 625-foot, 54-storey mixed-use residential and hotel tower, and a 910-foot, 61-storey residential and office tower along First Street providing 2.4 million square-feet of new hotel, office and residential spaces in this downtown neighbourhood. It further restores and revitalises two historic buildings on First Street. Responsive in urban and environmental terms, it brings together places to live and work in close proximity to the city’s new Transbay Transit Center.

A particular challenge for the design team, the irregularly shaped site, also offers opportunities for innovation. The design creates a highly efficient and flexible off-centre service core that allows for uninterrupted floorplates. This creates a truly accessible square at the ground floor of the First Street tower. The tower has been lifted up to provide a five-storey tall ‘urban plaza’, which is completely open-to-air and accessible throughout the day. This will be the most significant publicly accessible private space in the city featuring a restaurant and viewing platform, events such as concerts and farmers’ markets, as well as works of art set in a lush landscape. The hotel, residences and offices have separate entrances at ground floor, but share a common basement, loading dock and parking garage.

The design of the First Street tower is a response to San Francisco’s planning code that calls for proportionally reduced floorplates for higher floors. The tower takes on a crystalline form to articulate the façades on the skyline, and the floor plates are designed to allow tenants a high degree of flexibility. Their open layout is supported by offset cores and a diagonal perimeter structure, developed for seismic stability and resulting in a lightweight structure that is intrinsic to the building’s aesthetic. The building foundations are also designed for maximum stability. The tower is 30 percent lighter than a traditional building with a central core of similar size. It features innovative MEP and vertical transportation systems developed to attain a LEED Platinum rating.

Completing the new urban ensemble, is the mixed-use tower along Mission Street, which occupies a vacant site that was earlier used as a parking lot. It will be home to a new hotel operated by Waldorf Astoria, alongside stunning apartments located on the top floors. The stone-clad building features unique ‘glass vitrine’ windows, and is designed to achieve a LEED Gold rating.

The project is expected to be completed by 2021.

“I have always had a great fascination for San Francisco – a city with a youthful spirit has allowed it to constantly reinvent itself, yet retain a unique sense of urbanity. The Oceanwide Center encapsulates that essence – it is a pioneering example that combines spaces to live and work with a vibrant public realm in the heart of the city. The project now marks a major milestone with its groundbreaking, as the evolution of a sustainable model of high density, mixed-use development that I have always promoted.” 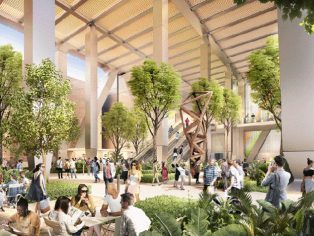