The Royal Institute of British Architects (RIBA) has announced the shortlist for the Stephen Lawrence Prize 2022.

The prize was established in 1998 in memory of Stephen Lawrence, a teenager who was on the road to becoming an architect when he was tragically murdered in a racist attack in 1993. Founded and supported by the Marco Goldschmied Foundation, the prize is intended to encourage new architectural talent and award the best projects with a construction budget of less than £1 million.

The seven shortlisted projects are:

“I am honoured to chair the Stephen Lawrence Prize jury in place of my father, Marco Goldschmied, who was sadly unable to participate this year, and has since passed away.”

“As a jury, we were seriously encouraged by the climate-conscious ethos that underpins so many of these small projects. From those that prioritise the re-use and adaptation of existing buildings and historic structures, to those that experiment with materials and technologies to meet low-carbon ambitions.”

“We were also delighted to select three projects that focus so heavily on fostering community: projects that create vibrant spaces and connections for both new and established communities and demonstrate the power of architecture to lift spirits and enhance lives.”

“My father launched this prize in 1998 with the intention of rewarding new architectural talent, and it has since evolved into a celebration of schemes that show the possibilities of innovative design on modest budgets. Before he passed away, I had a chance to discuss this year’s shortlisted projects with him; he was smiling and nodding with great satisfaction throughout. He delighted in the selection process, the variety of design expression, the visits and the award night. Above all, he cherished the people alongside whom he founded the Stephen Lawrence Prize, and those who were embraced into its community.”

“I am confident he would be proud both of the emerging practices we see here, and the talent and ingenuity embodied in these seven truly unique schemes.”

The winner of the Stephen Lawrence Prize 2022 will be announced at the RIBA Stirling Prize ceremony on Thursday 13 October at RIBA HQ, 66 Portland Place, London. 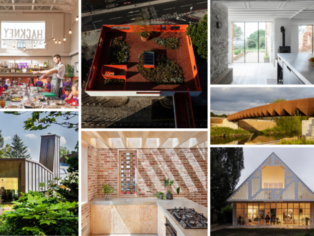