An Elgin primary school grew in size today with the installation of 17 pre-fabricated classroom modules.

Seafield Primary gained two extra classrooms and a new nursery in the space of 24 hours thanks to the advanced planning and site preparation.

The site has been prepared for the installation during the last few weeks, with the delivery and fitting planned for school half term to minimise disruption.

A fleet of trucks transporting the units were parked up on Lossie Green overnight, and at first light started ferrying the units one by one to a waiting crane and ground crew. Watch the film here

The work is part of a £17 million refurbishment programme of four Moray primaries; Seafield Primary in Elgin Applegrove in Forres, Millbank in Buckie and St Gerardine in Lossiemouth.

The refurbishment has been funded by a £10 million government grant, with the rest coming from Moray Council.

The buildings will be in use from January 2016 when refurbishment works on the existing nursery building will commence.

The contract has been awarded to Galliford Try, the parent company of Morrison Construction who recently undertook the £1.2 million refurbishment work on Elgin Town Hall and the construction of all Moray’s flood alleviation schemes.

Moray Council area stretches from Tomintoul in the south to the shores of the Moray Firth, from Keith in the east to Forres in the west. The council and its 4,500 employees respond to the needs of 92,500 residents in this beautiful part of Scotland, which nestles between Aberdeenshire and the Highlands.

Famous for its colony of dolphins, fabulous beaches and more malt whisky distilleries than any where else in Scotland, Moray is a thriving area and a great place to live.

Headquartered in  Elgin, the administrative capital of Moray. 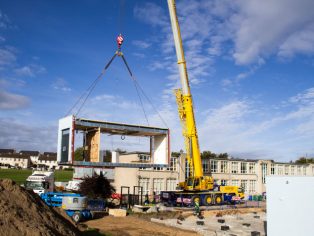