LWK Leads Another Win for TOD in Nanjing

LWK & Partners (HK) Ltd is pleased to announce that the Company has successfully won the bid for a transit-oriented development (TOD) project in the Jiangbei New District, Nanjing, China commissioned by the Nanjing Jiangbei New District Economic Hub Development Office. This national project is situated near Taishan Xincun Station and Baotashan Country Park. The area has long been a research and development (R&D) and education base with convenient transportation in the city.

LWK is responsible for the Masterplanning and Architectural Design of the project. The proposal was drawn based on urban planning concepts with an architectural perspective, which perfectly combines two of the Company’s core strengths. The project has a gross floor area of approximately 400,000 sq. m. It is expected to include office towers, residential buildings, shopping malls, a commercial street, a public transit hub and a district services centre.

“Our purpose was to study the location and surroundings of the railway station, so that we can draw a clear plan for the site, define the various spaces that should occupy the site, and how they should occupy it.”

Going through with the ‘integrated TOD’ concept, the multiple sites intended for various functions split by the motor highway are reunited through underground space. Baotashan Park will be restored – this will preserve the existing spaces and masses (such as the natural landscape of trees and waters, Baotashan, Baotashan Country Park and attached cultural heritage) as well as maximise its potential in the overall enhancement of community facilities so that it can develop into a community centre and public services centre. Moreover, a smart community is set up through the application of the ‘urban park’ concept. Schools in and around the site will be linked by smart promenades. It is expected that it will become an outstanding R&D and innovation area. The multi-level green platform included in the design represents the integration of green concepts – it is a multi-functional space that keeps the city and its people healthy.

From an architectural point of view, the fluid design of the commercial building is a continuation of Nanjing’s natural landscape – it is rich in both mountains and waters. Also stemming from this dynamic and organic cityscape, earth-covered constructions are pictured to blend seamlessly into the existing hills. Multiple sunken plazas are laid across the site to act as new meet-up points for city events. As a truly integrated development, the residential tower will feature a series of rooftop gardens, which will not only elevate the living experience, but also embellish the Nanjing skyline. Last but not least, the half-sunken public transit station will be a unique architecture that houses the high-efficiency transit system.

“TOD is an effective solution for the increasingly congested metropolitans. We foresaw the potential of the concept, which was why we decided to break into the TOD market early – it was an investment that has now paid off as our efforts are gaining recognition from our clients. As a company that is responsible to its community, we are making definite progress towards smarter cities. We look forward to future opportunities, while we continue to make things happen in the present.” 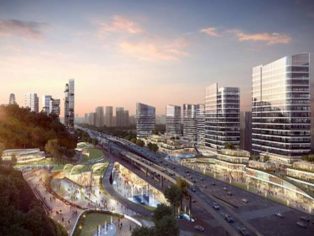