A district council tonight approved the largest application it has ever considered which will see the transformation of a garrison town into a thriving green town.

The Army will march out of the site later this year after more than 100 years in the town and instead of waiting until this happened, partners stepped in and have been working hard to ensure plans are afoot for this major change.

The town was one of the previous government’s Eco-towns and has recently been awarded ‘Housing Zone status’ by the Department for Communities and Local Government.

It has also been designated as one of five ‘step up towns’ by the Enterprise M3 Local Enterprise Partnership in recognition of its regional importance. This means that it has been earmarked as a major investment priority.

It now has everything in place to start delivering homes and jobs on the ground – and it’s aiming to be a green exemplar with the highest sustainability standards possible.

There are three sites in the town – all have planning approval and all have developers on board – which will see the overall regeneration of the town with 3,350 new homes, 5,500 new jobs, a thriving new town centre, new facilities and new schools (including a new secondary school).

The main site, which was approved last night, will be regenerated with new shops, offices, cafes, restaurants, a food store, a swimming pool in a new leisure centre, new schools and sports pitches.

Proposals also include a new cycling route, footpaths, public open space, car parks, children’s play areas, multi-use games areas, a BMX or skate park, allotments and landscaping – as well as the southern section of the new relief road enabling a more attractive alternative to the existing road for through traffic.

Consent was also given to convert an Army training area into an attractive green space which will be open to the public and will include car parking, footpaths and cycle routes – this will be the country’s third largest SANG (Suitable Alternative Natural Green Space – land which residents can enjoy for recreation so that other habitats are protected).

The plans were submitted by the Defence Infrastructure Organisation – which is the property arm of the Ministry of Defence.

There has been extensive consultation on the plans over several years and there will be further consultation with residents before a more detailed planning application is developed for some aspects of the proposals which will include things like further information about the new town centre, the layout of the homes and the materials used to build them.

Existing facilities (e.g. swimming pool, schools, sports pitches and community facilities) will be retained wherever possible until their replacement facilities are available for use.

“This decision is great news for the town and its residents and enables a new and exciting future for Whitehill & Bordon.

“A new vibrant and thriving town centre with facilities, jobs and opportunities will give Whitehill & Bordon the new lease of life which it needs.

“The regeneration of Whitehill & Bordon from garrison town to green town will be truly exemplary with the highest sustainability standards possible.

“Getting to this stage has involved an enormous amount of hard work from all the partners working together for the benefit of the town and the wider area.

“The Bordon Garrison is leaving later this year and initial work should start on site early in 2016 so the transformation of the town will start in earnest very soon.

“This is the start of a hugely exciting time for Whitehill & Bordon.”

“We are delighted to have received planning approval for the Bordon Garrison project, which will enable us to bring over 2,400 new homes to Hampshire.

“This development is set to transform Whitehill & Bordon for the better by providing much-needed affordable and private market housing, around 3,000 of new jobs to the local area and delivering new schools, new public amenities, infrastructure improvements and recreation facilities for the benefit of the whole community.

“We would like to thank East Hampshire District Council, Hampshire County Council and the Enterprise M3 LEP for supporting this exciting regeneration scheme as we move a step closer to making it a reality and look forward to starting work on site in early 2016.”

East Hampshire District Council’s planning committee met in Whitehill & Bordon so that residents could more easily hear about the proposals.

The council’s approval is subject to the satisfactory completion of a Section 106 planning agreement (this sets out the contributions developers will make towards facilities).  This is a legal undertaking, valued at more than £54million that will clarify the timing of funding for the social and community infrastructure (facilities) and other related matters.  It is expected formal planning consent will be granted this summer.

The departure of the Bordon Garrison from the current site will be marked by the ‘Farewell to the Garrison Festival’ on 27th June which will be an all-day event celebrating the Army’s presence in the town. 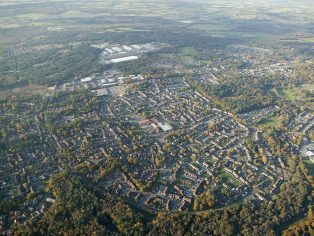