Atkins, a member of the SNC-Lavalin Group, has secured an extension to its role as programme designer for Heathrow Airport’s £1.1bn Asset Replacement programme.

The extension will see SNC-Lavalin’s Atkins business advising on the replacement and repurposing of airport infrastructure that has reached the end of its life. SNC-Lavalin acquired WS Atkins plc on July 3, 2017.

As a result of Heathrow’s current regulatory cycle being extended to 2019, SNC-Lavalin’s Atkins business has been awarded a contract extension, which will run for at least one year, to continue working with the airport to reduce operational risks, improve resilience and reduce energy consumption across the airport’s estate.

The Asset Replacement programme encompasses all parts of airport infrastructure, from the replacement of life-expired mechanical and electrical plant within the passenger terminals, through to the delivery of new stands and taxiways on the airfield. A focus has also been placed on upgrading and repurposing existing assets. The team will deliver the programme through the use of operational technology, providing solutions that maximise offsite manufacture and assembly, which is safer and involves improved quality control procedures.

“This contract extension is testament to the strong relationships we’ve built at Heathrow and our role in supporting our client to make informed asset investment decisions at the airport. We will use this opportunity to continue delivering asset performance, with increased availability and significantly reduced whole life costs and carbon impacts at the airport.”

Atkins is also part of the team designing Heathrow Airport’s sustainable expansion, having been appointed to deliver the upgrade to Heathrow’s IT programme and extend Heathrow’s Passenger Authentication Scanning System (PASS) to Terminal 5. PASS was initially installed at Heathrow Airport in 2012, and uses biometric facial recognition technology to link a passenger to their boarding pass. 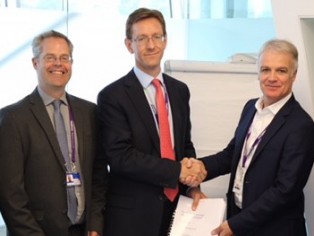