Opening celebrations were held on Friday at the Yacht Club de Monaco, led by HSH Prince Albert II and attended by Lord Foster and the club’s members. The new building forms the centrepiece of the remodelled harbour – its impressive new social and sporting facilities preserve the club’s heritage and traditions, while reinforcing Monaco as the leading international centre for yachting excellence and further developing the Principality’s thriving yacht industry.

Designed in response to the local climate, the new clubhouse sets high standards for sustainable design – the building is powered by renewable energy and incorporates photovoltaic cells, solar thermal panels and sea water cooling systems to take advantage of the sun and waterfront site. The architecture is a celebration of sailing – its large, deck-like terraces step up along the harbour to offer unrivalled views out to races at sea, as well as views inland over the Formula 1 Grand Prix circuit.

The club is entered via a glazed courtyard that frames views out over the harbour to the palace. The first floor, called deck two, features a club room, bar restaurant and swimming pool and is exclusive to YCM members. Above this courtyard is a double-height function space, executive offices and a series of ‘cabins’ for visiting guests. The uppermost floors accommodate a range of event spaces, and the quality in its detailing reflects the high levels of service for which the club is renowned. The fully glazed harbour elevations can be opened up to provide uninterrupted views, while the open air observation decks and cascading terraces are shaded by retractable fabric screens, supported by masts and booms to evoke the image of a ship moored in the harbour.

The yacht club is built on reclaimed land and extends the harbour to the east – the new YCM Marina can accommodate a range of craft, including sailing boats, and has 26 berths for 25-60 metre superyachts. Shops and public spaces animate the harbour level, reinforcing the club’s role as a destination for the whole community, as well as accommodating the Principality’s historic rowing club and the YCM’s sailing school – sliding doors encourage activities to spread out on to the quayside. Designed largely for children, the school provides classrooms, workshops and lofts for small boats.

Inland, there is a landscaped park on the roof of the sailing school and rowing club. Bounded on one side by the club’s restaurant terrace and leading on the other side to a new space for cultural activities, it complements the sequence of green spaces in this densely populated city and forms a new link in the pedestrian route between the quayside and Casino Square.

“The building is a little like a city in microcosm, with schools, parks, offices, restaurants, a network of interior circulation ‘streets’ and a hierarchy of public and private, social and functional spaces. It is a continuation of Monaco’s dense urban fabric, as well as the Yacht Club’s traditions and will be an important part of civic life. Every child in Monaco learns sailing at some stage during their education and those lessons will be in the new building – as a result, the Yacht Club will become even more rooted, in a public sense, in the Principality and part of its cultural and urban fabric.”

“With all of our projects, our approach to sustainability is to maximise the natural advantages of the local climate, while mitigating its extremes. We have also used locally sourced or recycled materials. Our starting point for the Yacht Club was extensive analysis of the climate and the way that the different spaces are used. Photovoltaic cells and solar thermal panels convert Monaco’s sunshine to energy, while the sea water is used for cooling and the facades can open completely to allow natural ventilation. To provide shade in the summer, there are sail-like canopies – a reference to the nautical traditions that Monaco is famous for.” 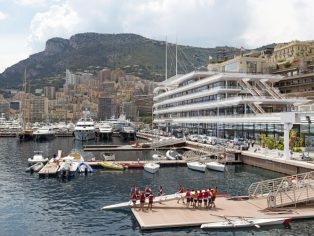