Property prices in prime central London continued to rise in July and now stand almost 60% above their financial crisis low in March 2009. Liam Bailey examines the latest trends, which point to total growth in 2013 of 6%.

Property prices in prime central London increased again in July, up by 0.5% month-onmonth. So far in 2013, prices for the very best homes in London have increased by 4.2%.

In spite of new record prices, interest among prospective buyers remains high. Property viewings in prime central London over the year-to-date are up by 15% compared to the same period in 2012 and the number of new applicants is up by a similar level. Rising demand has translated into higher sales volumes, up by 8.2% year-on-year.

Key factors driving price growth and interest include the city’s reputation as a safe haven for investment, and the value of the pound – something we explored in more detail in our recent London Residential Review.

Last year, we forecast that prices would remain unchanged in 2013, marking an end to the strong run the market has seen since early 2009. Our rationale was that the increase in Stamp Duty would have an impact on the top end of the market and there would be resistance to price growth from domestic and international purchasers.

In the event we overstated the negative impact of the 5% to 7% Stamp Duty rise for £2million+ properties. The further weakening in sterling in the first half of the year helped to boost overseas interest and domestic demand has been aided by London’s economic recovery and, arguably, from the Government’s Help to Buy scheme, which was launched at the end of Q1 this year.

While Help to Buy, with its £600,000 valuation cap is a more significant factor in the wider mainstream market, rising housing market sentiment, as reported in our House Price Sentiment Index, is infectious across markets and price brackets and is likely to act as a positive influence in terms of future pricing, even in London’s prime market segments.

We have therefore raised our forecast for prime central London price growth for 2013 to 6%.

There remain differences in performance between locations and price bands across prime central London. In July, property in the sub-£1million bracket increased in value by 1%, while homes in the £1million-£2.5million price bracket climbed 0.6%. Comparatively, the price of ‘super prime’ £10million+ homes remained unchanged over the course of the month.

In Marylebone for example, where property values have climbed by 4.7% over the year-to-date, interest and activity in the sub-£3million market has been the primary driver of these price rises. 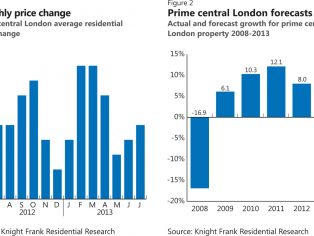 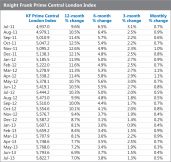 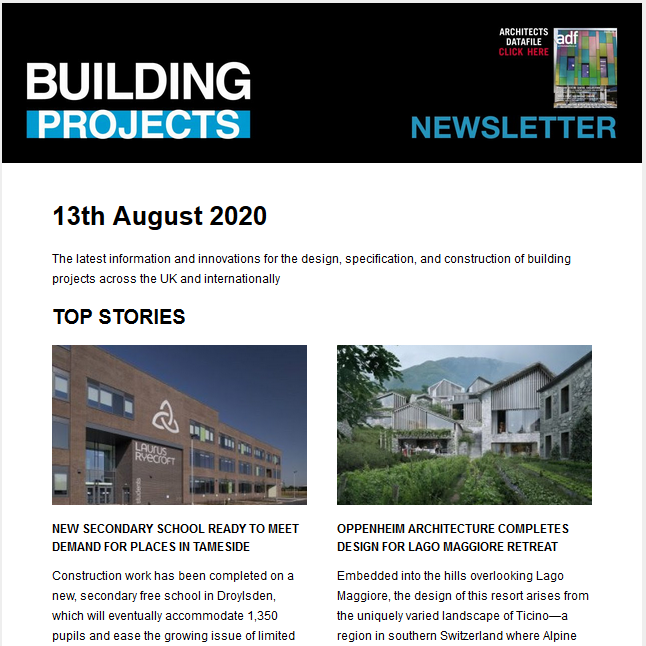