Foster + Partners has formally submitted plans for a new four-runway hub airport on the Isle of Grain in the Thames Estuary to the government’s Airports Commission. The Thames Hub Airport proposal has been advocated by Mayor of London, Boris Johnson and has been developed with the support of a number of leading organisations.

The new hub airport can open in 2029 with capacity for 110million passengers per year at a cost of £24billion, and has the flexibility to grow to 150million passengers per year and beyond. The majority of flights can approach the airport over water, relieving five million Londoners of the noise, pollution and dangers of flight paths over the capital. Unlike Heathrow, the airport can operate 24-hours a day. The airport has a viable private funding model, which ensures that it will be financially sustainable and can achieve a fair price for passengers and airlines.

The proposed site capitalises on the eastward thrust of London’s development and existing investments in high-speed rail, reducing the need for additional surface access by connecting with High Speed 1, High Speed 2 and Crossrail. Journey times by rail from St Pancras would be just 26 minutes, or 40 minutes by rail from Waterloo. The Thames Hub Airport is also strategically located close to the South East’s major ports, including the new Dubai Port World’s Thames Gateway, to enable the successful economic integration of rail, sea and air freight.

Under current legislation, the planning process would be identical to a third runway at Heathrow. The Thames Hub Airport can open within 16 years. A third Heathrow runway would take the same time to build and would be full within a decade of opening, necessitating a fourth runway. Fewer homes would be relocated than at Heathrow and, without the constraints of an urban site and operational airport, it would be more cost-effective to build. Phased development can take into account evolving passenger demand and the transition carefully managed, with Heathrow transformed into a prosperous new London borough and a sustainable commercial centre to rival Canary Wharf.

“The infrastructure of a nation can never be taken for granted. Only for so long can we trade on an inheritance from the past. Heathrow, with its military origins, is a case in point. There is a limit to how much it can be patched up and enlarged – even for the needs of today, let alone tomorrow – and would you ever choose a location which dictates flight paths over the heart of London?

We have reached a point where we must act, in the tradition of those Victorian forebears and create afresh – to invest now and safeguard future generations. Why should we fall behind when we could secure a competitive edge?

The choice is not about time or money. A new four-runway true hub airport in the Thames Estuary, at £24 billion, costs less to build than two extra runways at Heathrow and can be realised on a similar timescale. Our funding model shows that it could pay for itself within a decade of opening.

In the context of what we as architects have achieved, with our UK-based engineering colleagues, in Hong Kong and Beijing, our proposals are not even overly ambitious. They are cautiously well considered and based on a wealth of well proven experience.

But our proposal did not start as an airport – it was part of a wider remit. London, like New York and other centres of economic influence, has to face up to the threat of rising water levels triggered by global warming. An integral part of our long-term proposal is future flood protection for the nation’s capital and its eastward expansion, which is also a source of tidal energy.

The project also maximises the existing investments made in High Speed 1 by utilising its spare capacity to create fast, efficient access to the airport from London and continental Europe. By connecting the airport to Crossrail and High Speed 2, we can open up routes for the whole of the UK. The site’s close proximity to the South East’s major ports can give Britain’s manufacturing industry a vital strategic advantage in terms of freight distribution.

We are not proposing the best new international hub in the world as an alternative to the existing stock of secondary and regional airports in the UK. On the contrary, given the current pattern of the industry’s growth, it would work in parallel with them.

Heathrow may be in the worst site for an airport, but it is a perfect location for new homes and clean technology-based research facilities. The opportunities it presents as a green field site are boundless – for starters why not Britain’s answer to Silicon Valley? Its proximity to London virtually guarantees its long-term development potential, aside from the environmental and security benefits that also follow from removing its blight as an airport.” 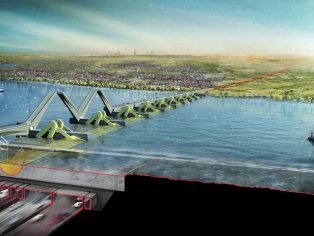