Benoy is proud to announce that its first hotel in Asia, EAST Hotel in Beijing, has won the Hospitality Architecture and Design (HA+D) ‘Certificate of Excellence’ in Hotel Interior Design. The HA+D Awards, an international program celebrating excellence in hospitality project design, innovation and sustainability, were announced at ceremony held in Hong Kong in July.

Since opening in September last year, EAST Hotel has proven to be a popular addition to the international business hotel scene, featuring in Condé Nast Traveller and Travel + Leisure magazines’ top hotel lists for 2013.Displaying an acute sensitivity and connection to its surrounding landscape, EAST has become known for its striking curved glass façade and unique interiors which showcase original artwork by local contemporary artists from the nearby ‘798 Art District’. A design-led scheme, the integration of modern amenities and technology were important aspects of the interior design and detailing, alongside a suite of state-of-the-art business and leisure facilities.John Denton, Benoy’s Director of Interior Design commented:

‘We are very excited to receive the HA+D award which has reinforced our belief in the unique design attributes that set EAST Hotel apart from other schemes’. 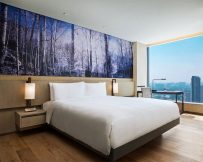 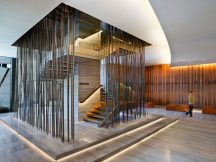