Established in November 2012, Dara Huang has pulled together talented team of architects, planners and designers to create a studio focused on combining art, materiality and space.

The company boasts an already impressive client list featuring global giants Samsung and LaSalle IM, and its talents are in demand from many international developers. Selected upcoming projects include: Daruma a restaurant in Hong Kong, Fort George a yachting club concept in Croatia, and an upcoming luxury Indian restaurant in Zurich.

About Dara: After receiving her Master Degree at Harvard University, Dara Huang’s previous design experience include contributing to the new Tribeca skyscraper, 56 Leonard Street in New York City; The New Tate Modern Museum in London; Manolo Blahnik stores worldwide; and was personally invited to compete for the design of the Samsung Pavilion for the London Olympics 2012.

Dara has gained invaluable experience at Pritzker Prize winning firms, honing her skills by working one-on-one with Jacques Herzog and Pierre de Meuron of Herzog de Meuron in Basel, Switzerland and Foster + Partners in London. She has been the recipient of various awards including: The Clifford Wong Prize, The KPF Traveling Fellowship, The Young Architects Award and First Place in The AIAS National Design Review Competition.

The daughter of a NASA scientist who emigrated from Taiwan to the United States, Dara grew up in multi-cultural surroundings influenced by living in places like Tokyo, Basel and New York City. Dara Huang’s designs reflect a cross between contemporary art, fashion, and industrial and modern architecture. 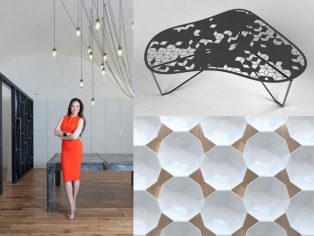