Work has started on one of the largest urban regeneration projects in Sweden.

The project, worth SEK 12bn, will transform a central Stockholm area, Slussen, into an enhanced civic quarter.

“The City of Stockholm has truly embraced a wonderful opportunity to re-establish and reinforce the vital link between Stockholm’s central islands of Södermalm and the heritage site of Gamla stan, rehabilitating the historic fabric of the city while creating a lively new urban destination for all.

“This is a once in a life time undertaking in a uniquely significant and spectacular setting. We are honoured and very proud to be a part of this incredible and visionary project.”

The scale and grain of the New Slussen deliberately preserves the city’s character and precious views and vistas at this historic location. A series of new public spaces, an accessible quayside, pedestrian and cycle routes will embolden the connectivity between the Södermalm urban quarter and the 18th Century buildings of Gamla stan, transforming the once major traffic junction into the City’s new meeting place.

A central feature of New Slussen will be the ‘Water Plaza’, a pedestrianised public space arranged around the new navigation lock and realigned quayside, animated by new restaurants, cafes and cultural amenities. On the Södermalm side, the space around the existing City Museum will be extended out over the new below-ground transport interchange and shopping mezzanine to create a series of new public spaces. 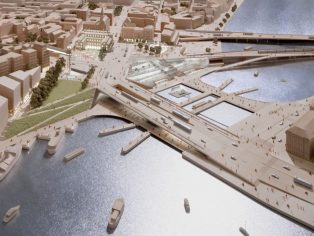