Construction begins on the Atkins’ designed supertall tower, pearl of the north in Shenyang, China

Construction has begun on the Atkins’ designed Baoneng Shenyang Global Financial Centre in Shenyang, China. The development, with total investment estimated at over £1billion, consists of two towers of 565- and 328-metres high respectively, and will be the landmark of Shenyang, the largest city in northeast China.

The 565-metre tower called the Pearl of the North will become the tallest building in Shenyang, and signals the continuing growth of the city. As a symbol of wisdom, luxury and purity in Chinese culture, the pearl is instantly recognisable at the top of the landmark tower and acts as a beacon for the project and the city as a whole.

“Our client challenged us to design a supertall building that is iconic, yet simple in structure. In addition to meeting seismic codes and international standards, the project has to be efficient and satisfy a tight construction schedule. It showcases Atkins’ expertise in designing supertall towers, but more importantly it is a landmark project that achieves the client’s and stakeholders’ expectations.”

Atkins was commissioned by Baoneng Real Estate Development for architectural design, including concept design, scheme design, preliminary design and façade design development for the two towers. The 565-metre tower will contain 111 floors, accommodating class A offices and other amenities such as a luxury executive club on the top. The 328-metre tower will host 34 floors of office with a 320 room five star luxury hotel on top. The hotel podium facilities include a 3,000 square metre banquet hall plus 6,000 square metres of associated facilities, which can accommodate luxury automobile showcases. Shenyang, traditionally a heavy industrial city, is now a key centre of the automobile industry in China.

The towers form part of the masterplan for an area of 58.5 hectares called the “Golden Corridor” Youth Street in the central business district. The development overlooks Youth Park and the Nanyun River to the east. In addition to the two tall towers the complex will contain five luxury residential towers each approximately 200 metres high above a large shopping mall.

Construction of the complex is due to be completed in 2018. 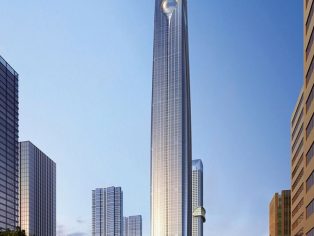