Construction begins on new City Hall for Sunderland by FaulknerBrowns

Construction work has begun on a key element of a £500m city centre regeneration scheme in Sunderland — the new £42m City Hall designed by FaulknerBrowns Architects.

The scheme represents phase two of the VAUX Brewery masterplan to regenerate a prominent 5.5ha site to the north west of the city centre, creating a vibrant mixed-use neighbourhood.

The project provides a mix of private and public uses, while consolidating a wide range of municipal services previously located across eight locations around the city, bringing them together under one roof. Overall, the project is set to deliver net operational savings to Sunderland City Council–one of a number of occupiers in the building–of around £22m over twenty five years, compared with staying in the current civic centre which is set to become obsolete in the next five years. In addition to municipal customer services, the building comprises a fitness room and an employment centre.

The masterplan site, located on the south banks of the River Wear in the centre of the city has been a vacant brownfield site for some years and was acquired by the council in 2011. The new council headquarters will occupy plots 13 & 14, located at the southern edge of the masterplan. The scheme therefore takes on an importance within the context of the city centre beyond, presenting an outward facing elevation from the VAUX development to the city.

The new building responds in both scale and mass, presenting two volumes fronting onto Keel Square linked by a covered central avenue. This acts as a public thoroughfare to make the available services visible, legible and accessible. An activity-based work environment unfolds along this central internal lightwell, delivering an engaging, flexible workspace with an emphasis on natural daylight and wellbeing throughout the building. Visual connections and interaction between occupants and building users is promoted through the openness and transparency of the interior spaces.

Externally, the building responds to its siting adjacent to the recently upgraded Keel Square, an important new public space within the city and an integral part of the masterplan development. The building is grounded on a well-defined base with an emphasis on engaging the street with an appropriate civic expression. The columns and beams are clad in reconstituted stone with a tone and finish that responds to the materiality of the grade II listed baroque style Magistrates Court (1905) which frames the square. Large glazed openings promote transparency and create an active ground floor with a strong visual relationship to the public realm.

The building envelope takes inspiration from the advanced engineering and material craftsmanship synonymous with the city’s industrial and maritime heritage. The middle and top sections of the facade incorporate lightweight aluminium profiles set within floor to floor glazing, arranged to provide a structured and subtly varied articulation to the envelope, orientated to passively control solar heat gain.

“The design embraces the needs of everyone. Our proposal provides a place-driven approach to both civic and private workplace, creating a strong urban framework that fosters community, and promotes interaction between citizens and municipal workers, putting people at its heart.” 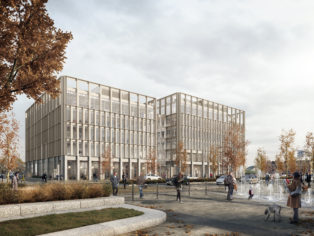 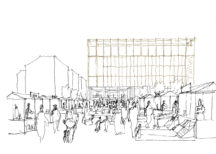 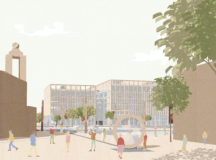 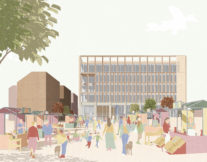