Canaletto over half sold just four months after launch

Over half of the 190 apartments in Canaletto, the luxurious high-rise development on London’s City Road have been sold, just four months after launch.

The 31 storey development is releasing apartments on its 16th and 17th floor months ahead of schedule in order to meet demand.

Premier apartments will go on sale in May and will be priced between £2m and £5m. A penthouse unit, which will be up to 8,000 sq ft, will be released at a later date.

Canaletto is the first of a cluster of waterside state-of-the-art residential skyscrapers that are being built by the City Road Basin, part of the Regent’s Canal.

Aref Lahham, managing director and founding partner of Orion Capital Managers, sponsor to the fund financing the development, said: “Demand for apartments in Canaletto has exceeded our expectations for the development. We are significantly ahead of schedule for sales as buyers snap up the opportunity to join the neighbourhoods in the sky offered by Canaletto.”

It is UNStudio’s first major project in the UK. The architect is best known for the Mercedes-Benz Museum in Stuttgart, Raffles City in Hangzhou, Scotts Tower in Singapore and the Erasmus Bridge in Rotterdam.

The tower is designed with a unique curving facade of aluminium and glass that breaks the volume into a series of three-to-five-storey clusters.

Each of these clusters are imagined as individual neighbourhoods in the sky, with balconies and terraces that afford views of the City of London to the south and the basin waterways to the north.

Canaletto will offer its residents the highest quality of service and facilities, ranging from hotel style concierge services to fibre-optic broadband to each apartment.

The development is situated within easy reach of four of London’s most exciting neighbourhoods: The City, Clerkenwell, Islington and Shoreditch.

City Road is undergoing radical change on the back of sustained commercial and residential development in the nearby Silicon Roundabout community. In the last three years the number of tech companies in East London has risen from 200 to 1,300.

About 48,000 people are employed in the tech cluster with plans for a further 70,000 jobs to be created. The government has pledged £50m to transform the Old Street roundabout into the biggest indoor civic space in Europe with support for entrepreneurs and tech start-ups.

Jones Lang LaSalle and Knight Frank are acting as agents for Canaletto. Groveworld is acting as development manager. 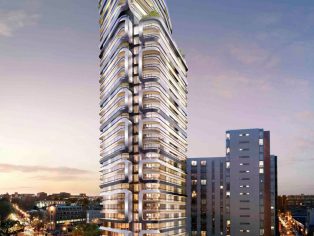