The goal of the QIRP is to create a service that will promote the use of public transportation as a valid alternative to private transportation for the population of Doha.

The Metro Network forms the key component of the QIRP, with phase 1 planned to include around 35 stations and phase 2, around 60 stations, and will serve as the backbone of the public transport system in the Greater Doha Area (GDA). The full network is planned to comprise four lines connecting the GDA as well as the Al Khor and Al Wakrah-Mesaieed communities, located north and south of Doha, respectively.

UNStudio’s design forms a bridge between the past and the future of Qatar, drawing inspiration from the vast regional architectural lexicon, whilst simultaneously presenting a vision of modernisation and preservation. The design further aims to incorporate and integrate all functional and technical aspects of the stations and network into a coherent architectural expression with a view to making the Qatar Rail Metro Network a global benchmark for public transportation services.

Since its appointment, UNStudio has developed an ‘Architectural Branding Manual’, a set of design guidelines, architectural details and material outlines that will assure the spatial quality and clarity of the network. The manual will be used by the appointed Design & Build contractors in the construction and delivery of the 35 stations of phase 1.

“Through the production of a design manual and with the use of adaptive parametric design, it has been possible for us to create a design with many variants, yet one which maintains a coherent identity throughout all of the stations. In this way, we can combine local contextual differences within an overall identity and parametrically adapt physical factors such as wayfinding, daylight penetration, passenger flows, constructive elements etc. in a complex but extremely disciplined system.”

The design proposal represents a flexible new architectural system which can adapt itself to the scalar challenges posed by the Metro Network. With this mission, Qatar Rail’s Metro Network will have a substantial impact on the lives of Doha’s population, providing a convenient and practical service for years to come. 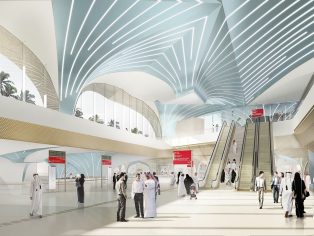