Barking Riverside Limited (BRL) has reached a major transport infrastructure milestone, with construction of the River Bus pier commencing this month. The achievement mirrors an acceleration in delivery, as the master developer prepares to launch land parcels in the new district centre, Station Quarter, and ramps up the delivery of homes and facilities on site.

The £7.3M contract to deliver the new pier for Barking Riverside, which will be served by an Uber Boat by Thames Clippers service from 2022, has been awarded to McLaughlin & Harvey Ltd.

The building and civil engineering contractor will manage the design and build contract for the project. The fabrication of the canting brow and pontoon will be delivered off-site by Ravestein BV, a shipyard construction company in the Netherlands. Access works will start on site from August 2021, followed by piling in October 2021 with the pontoon expected to be transported to Barking Riverside and installed in early 2022.

Concept designs for the pier were created by specialist marine engineers Beckett Rankine, the designers behind a similar River Bus pier at Royal Wharf which opened in 2019, and Anthony Carlile Architects.  Set on a tidal area of the River Thames, the canting brow at Barking Riverside will be 63 metres, one of the longest on the Uber Boat by Thames Clippers network.

Expected to open to the public in Spring 2022, Barking Riverside will be Uber Boat by Thames Clippers’ newest stop, which will expand the service to 24 locations along the River Thames. Serving Barking Riverside and the wider Barking and Dagenham community, the service will also create a new link across the Thames to Woolwich in just 6 minutes, and upstream to Greenwich and Canary Wharf within 20 and 35 minutes respectively. Central London will be accessible in 45 minutes.

“Activating the river, undoubtedly one of the site’s biggest assets, is key to our offer here at Barking Riverside. Construction of the pier commencing marks a major infrastructure milestone as we continue to unlock the site, and this running in parallel with the completion of the Overground station means Barking Riverside will be firmly on the map in the next year”.

“Through partnership working, we are proud to have brought this project forward in a relatively short space of time. We have partnered with Uber Boat by Thames Clippers, Barking and Dagenham Council, who have also contributed funding for this project, McLaughlin & Harvey and other contractors to bring this project to fruition in just two years – from concept to the service commencing.”

“McLaughlin & Harvey is delighted to have been appointed to deliver the new pier for Barking Riverside. We are bringing years of extensive experience in marine and landside works, and we look forward to commencing the project next month.”

The Uber Boat by Thames Clippers service is expected to start running in 2022. 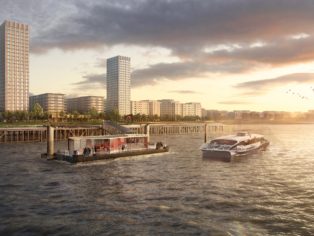