Atkins has provided engineering services as part of a drive to preserve and restore the historic structures at the Plum Island Lighthouse compound in Suffolk County, New York. The proposed rehabilitation and restoration—which has an estimated construction cost of $3 million—will seek to prevent further deterioration, restore the 34-foot tall lighthouse tower, structurally stabilise the buildings to maintain integrity, and protect the buildings from water and severe weather.

Plum Island is home to the Plum Island Animal Disease Center, the US’ federal research facility dedicated to the study of animal diseases, and is maintained by the Department of Homeland Security Directorate for Science and Technology.

“The Department of Homeland Security hope to restore the lighthouse to its historic appearance, stabilise the structure, and remove any hazardous materials from the interior so that staff and visitors can safely enter the building and climb the tower. Another potential benefit would be to make this significant piece of our nation’s maritime history available again for public use.”

The proposed rehabilitation of the lighthouse and its surrounding historic structures will involve the repairing or replacing ironwork, including elements that do not conform to the original design; replacing existing roofs and all flashings; repairing or replacing floor and roof structural framing; repairing masonry and masonry joints; repairing existing water leaks to make the structures completely water- and weatherproof; and removing hazardous materials from the interior.

Atkins’ concept design and scope of works were performed under an existing contract administered by the US Army Corps of Engineers Huntsville Engineering and Support Center. In addition to using building information modelling (BIM) technology to prepare the design drawings, Atkins complied with multiple state and federal codes, including the National Lighthouse Protection Act and Historic Lighthouse Preservation Handbook, among others. 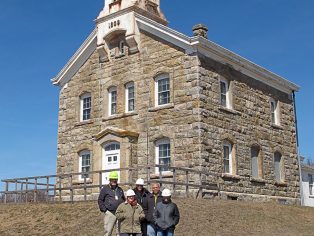