Al Habtoor Group has appointed Atkins to provide full multidisciplinary design services for three luxury residential towers and a retail podium totalling 395,000 m² on a prime site in the heart of Dubai, UAE. The scheme is a key part of Al Habtoor City, a major new mixed-use development next to Sheikh Zayed Road, within one of the most high profile plots in the city.

Atkins will be delivering architectural, structural, MEP and ground engineering design for the project, comprising two 75-storey residential towers and a third 52-storey tower, which will together house up to 1,460 apartments and 11 penthouses with exclusive leisure facilities for residents. Each penthouse will include its own private sky garden and swimming pool, while the two taller blocks will feature a stunning four-storey penthouse incorporating more than 3,000m² of living space.

The Al Habtoor City site is next to the planned Dubai Water Canal project (unveiled in October 2013), which will provide a strong influence to support delivery of a world-class urban and marina environment, with an inviting and accessible public realm.

“Our client’s aspiration was for classical elegance with efficient contemporary overtones. In order to achieve this, our design inspiration was sourced from early 20th century art deco architecture.

“The need for high quality landscaping and public realm has also been of particular interest to Al Habtoor. Great care has been taken to achieve a harmonious design which responds to the immediate context and environment, in order to encourage greater public participation within this special setting.”

The orientation and massing of the buildings seek to maximise sea and canal views, while reducing energy consumption by taking advantage of natural light. In addition to attracting tourists and visitors, the podium retail facility will provide for the daily needs of residents, reducing their need to use cars.

Other components of the Al Habtoor City complex (not designed by Atkins) will include three hotels, to be operated by Starwood Hotels and Resorts, and a spectacular water-themed theatre. The plot for the development is in Dubai’s Business Bay, close to Dubai International Financial Centre (DIFC) and Downtown Dubai, home to the world’s tallest building, the Burj Khalifa. Its eventual position on the banks of the Dubai Water Canal will ensure it becomes a key destination for tourism and leisure.

“This will be a landmark development for Al Habtoor. Its vision is to set new standards in luxury development, while ensuring the project is both environmentally sustainable and commercially viable.

“The launch of Dubai Water Canal has added a completely different aspect to the project, enabling Al Habtoor City to become one of the city’s go-to destinations where people can live, work and play.”

Atkins has completed the concept design stage and is undertaking detailed design for the project, with enabling works already underway. The project is due for completion in 2015. 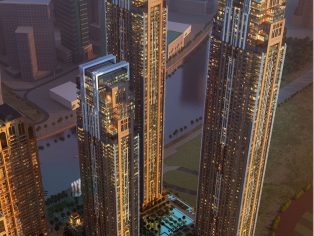