Work to create an innovative and integrated IT park in one of China’s wealthiest cities starts this week as construction begins on the Atkins-designed Cloud Computing Industry Park in Karamay, Xinjiang province.

The eco-friendly park, which will cover almost 50,000 sqm, will become home to a number of software companies and has been designed to encourage a creative culture, incorporating shared facilities and social spaces. Modular buildings, which are partly pre-fabricated off site, will link together and minimise exposure to the extreme range of temperatures typical in the region (-30°C in the winter to over 42°C in the summer).

“Our challenge was to design collaborative contemporary spaces to help attract a new growth industry to the region. The innovative ‘binary’ masterplan approach enables our client to grow the park in further stages within a flexible modular system. The project highlights Atkins’ leadership as a multidisciplinary consultant, able to pull in skills from architecture, landscape design and sustainability teams.”

Atkins’ modular and cost effective design, which was developed with the aid of BIM (building information management), has been designed according to the Chinese “China Three-Star” green building system, a first for the city of Karamay.

Karamay has the highest GDP per capita in China due to its connection with one of the country’s biggest oil fields. Founded 50 years ago, Karamay has recently been striving to diversify its economy and reduce its reliance on the oil sector. Atkins has been instrumental in this process over a number of years to provide development consultancy to prepare the City Diversification Strategy in 2011 which defines a route for the city to develop a circular economy and identified the opportunity to attract a wide range of other industries to the city such as IT (including cloud computing), engineering services, automotive and tourism. Atkins has also been a key masterplanner for the Karamay city government, with designs provided for a new transport hub, a central business district and motor city zone as well as a new park, lake and bridge. 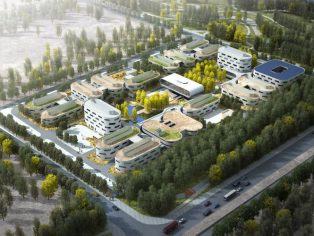